Who doesn’t have a desire to slow down and reflect–surrounded by a little Himalayan inspiration from the past? The need to carve out sacred space in our lives is as pressing today as it was in time immemorial, when newborn spiritual beliefs were gently rocked in the cradles of civilization to a soft, rhythmic chanting.

The Rubin Museum of Art knows this. What the secular, cultural institution does best is provide a springboard, allowing ancient art and spiritual beliefs to transcend time and continents and catalyze our own personal experience in the here and now. They have recently devoted the entire fourth floor to Sacred Spaces, a calm, spare walkway for a changing showcase of Eastern rituals as well as a permanent setting for one its crown jewels, the Tibetan Buddhist Shrine Room. Relocated and expanded, the lushly appointed replica of a private shrine typical of an upper class Tibetan home is open for the business of contemporary contemplation.

On a perfect autumn day, I entered the open space that spins out from the dramatic circular stairwell. In the first section I was greeted by a huge reflecting bowl. A group of school children was gathered on the floor nearby, working a very low tech interactive feature as they answered the question posed: “What is your sacred space?” For this Collected Spaces project, they were writing in pencil on pieces of white paper and folding, then depositing them in the bowl. I glanced in and the first one that caught my eye read “MY BODY.” Good answer, I thought. They are all good answers, resulting from the simple act of slowing down to contemplate.

“Natural spaces, religious spaces, and states-of-mind are the most prevalent responses,” shares Dominique Townsend, the museum’s director of interpretation. From the bowl, each and every note is acknowledged—displayed in the museum or documented on their website—the interactive aspect now brought up to high tech Tumblr-feed speed.

The current exhibit’s focus is on geography as well as architectural and structural sense of space, reminding us of the sacred interaction with our environment. Continuing, I next found myself engulfed by a panoramic photograph of Lomanthang, Mustang, Nepal, taken by Jaroslav Poncar. Here I sat and marveled at the vista, pondering the power and beauty of nature, and understanding how Tibetan Buddhism could blossom and flourish in such a space.

What better way to get a New Yorker to slow down but than to provide not one giant screen of activity–but two? In the twelve-minute loop video installation created by Deidi von Schaewen, a once-every-twelve-years sacred rite in Shravanabelgola, Karnataka, India is documented. In this hypnotizing display, a massive stone icon of an enlightened being of the Jain religion (the tallest single-stone sculpture on earth) is anointed by devotees over the course of four days. Intentionally spilled milk, as well as washes of pigments such as turmeric, and rose petals are poured from above by those earning their religious merits, while below, Jain monks, nude for ascetic reasons, worship at and wash the feet of the icon. Jainism is one of the oldest of Indian religions, totally devoted to nonviolence toward humans, animals, insects, and even plants. With world events ever-escalating in the opposite direction of Jainism, there is much to contemplate here.

As I continued, I heard chanting and stopped in my tracks at the colorful and viscerally symbolic thangka, the Wheel of Life. Said to have been designed by Buddha himself, its original purpose was to hang at the entrance of a Buddhist temple for monks and the public alike to reflect on. This one also serves as a sign marker to let us know we have arrived to the main event on this floor, the Tibetan Buddhist Shrine Room. 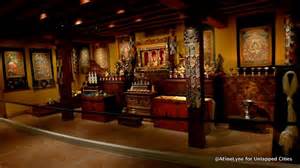 Originally the Shrine Room was on loan from the Smithsonian Institution’s Arthur M. Sackler Gallery, tucked around a dark corner for visitors to peek into. I recall my earlier visit, where I felt as if I were taking a tour of an historic house, with the room roped off and a distinct separation between me and the energy of the space. The newly designed setting welcomes our presence and immersion into the experience with an extended roof and comfortable stools. And so I took a seat.

A warm, golden aura of abundance permeates the space, of which every nook, cranny, and inch of wall is filled with spiritual art and artifacts in an orderly and serene manner. The effect is soothing and enveloping in a very tactile way—glowing reflections on cymbals and inlaid wood, silken threads and sculptural deities—all evoking an ancient tradition of devotion in an exotic domestic setting that invites a spark to ignite in our own personal concept of a private shrine.

The museum recently hosted an adult education course in the galleries, and is currently conducting tours and educational programs here.