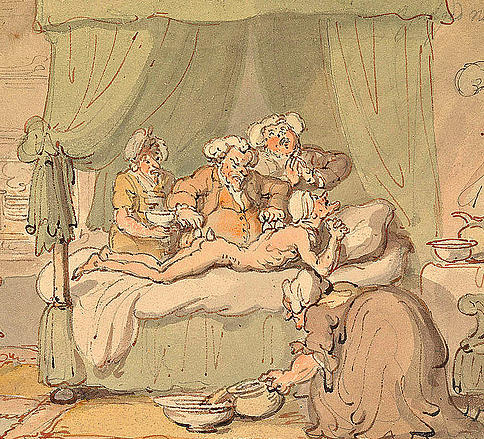 On the first really cold day of autumn, I found myself lying face down with a dozen clear glass orbs suctioned onto my back in a ritual known as “cupping.” Sluggish and out of sorts, I was curious about this healing tradition that has spanned the globe, and dates back some three thousand years, clearly indicating that something here really works.

Cupping—believed to harness and release one’s Qi (vital energy), thus addressing blood stagnation—has begun to be used in western medical settings and studied by western doctors. Even the NY Mets are doing it!

I decided to take the plunge to see if it could restore my energy levels, then find out from the doctor just how it works.

Peter Schell, a licensed TCM (traditional Chinese medicine) practitioner who is considered one of the best in New York City, reminded me of a puckish and friendly Dr. House. Schell relies on his first impressions. Before I filled out the standard health history forms, he had already assessed whether I might be leaning toward circulatory excesses or deficiencies, from my lip and skin pallor, voice timbre, and the way I carried myself.

He took my pulse and looked at my tongue from above and below, the latter harboring some telltale blood vessels. Next, he palpitated the acupuncture points corresponding to my lungs, heart, liver, kidneys, and small intestines. Finally, with the glow of a school boy showing off his first chemistry set, Schell opened a case of beautiful glass globes that, he assured me, he sterilizes before putting into service.

A lit alcohol swab was held briefly in each cup, which was then placed, inverted, onto an acupuncture point on my back. The suction, caused by the flame absorbing the oxygen, drew the skin under the cup to rise, tapping into my Qi, which then brought my blood to the surface.

I was left alone for fifteen minutes, although time seemed to dissipate along with the oxygen as the vacuums formed. A strangely pleasant discomfort suspended me until Schell returned, and, one by one, removed the cups. They indeed left perfect circles—I joked that my cats could play Twister on my back when I got home—but in reality, it was a bit disconcerting. However, I felt no pain. I got up slowly and dressed, expecting wooziness or worse. Instead, I felt completely energized.

Was I part of a magic act? It all seemed to work—but how? Schell was only too happy to reveal it to me.

Peter Schell: The suction from the cupping actually creates a micro-trauma as the blood in the immediate area rises to the surface. That in turn attracts more blood to circulate over a larger area. This is especially beneficial for stagnation-based illnesses, such as in the lungs or heart, or for relieving any pain. The marks made resemble, but are not, actual bruises. They are simply indicative of circulation movement around the cups.
SW: And from a Chinese POV?:

PS: The motive force is Qi, which then moves the blood in a tandem effect. There is a TCM saying: “Where there is no movement there, is pain; where there is movement, there is no pain.” The cups move the Qi.

SW: After you evaluate a patient, how do you assess the dosage of cupping?

PS: The evaluation determines how long I allow the fire to burn in the cup, using up oxygen, before I place it on the skin, as well as the length of time I leave it in place. The stronger vacuum is for excessive circulation types experiencing a lot of pain and blood stasis. It is important to gauge correctly.

SW: Are there different cupping styles?

PS: There are over a dozen cupping styles. The most general are wet and dry. You experienced dry. “Sliding cups” can also be done with dry cupping, using massage oil on the skin. Wet is a more aggressive style, as it involves actual bloodletting with tiny incisions. Chinese laborers who suffer acute pain from lifting and exerting have traditionally benefited from this. They often take a treatment on a lunch break and go right back to work, feeling relief. In Islamic countries, wet cupping has sustained popularity after early documentation was discovered in the teachings of Mohammed.

SW: What about the cups themselves?

PS: Glass is what I use. I prefer it aesthetically, and it is easier to move around. Glass cups come in different sizes, some with a pump and valve to create the vacuum. Plastic cups invite problems with sterilization.

SW: You practice traditional Chinese medicine, of which cupping is just one modality. How prevalent is cupping in China, now that it is becoming more westernized?

PS: I normally do acupuncture or Tui Na (Chinese orthopedic massage) and include cupping with these procedures. In the 1960s and 70s, professional schools in China were attempting to distance themselves from cupping, viewed as a folk medicine for the masses. Cupping was still widely practiced and recognized as a very useful modality. One of my teachers used it in the mountains of Taiwan where, as a medic, he had few resources. Now it is being seriously researched and used in spas and hospitals throughout China.

SW: Anything you’d like to say to the doubters?

PS: Try it, it works! And you’ll notice results immediately.

I can vouch for that. Four days after “The Great Cupping Experiment,” my last red circle is fading away. But my energy is not. I wonder if the Mets need a pinch hitter in the World Series?