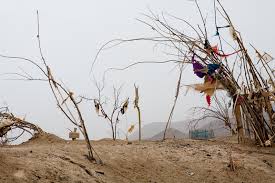 Over the centuries the desert has been a spiritual destination for mystics, healers, and seekers of visions. And also for Brooklyn-born photographer Lisa Ross. Using her camera as a spiritual diving rod, she explored the living shrines of Uyghur, China, which have been visited by religious followers for hundreds of years – before they are destroyed.

YogaCityNYC’s Sharon Watts wandered into the photos on display at the Rubin Museum before a rare sit-down with Lisa on her home turf to find out how she was able to visit this remote, restricted part of the world to capture these intimate yet astonishing images.

Sharon Watts: What struck me first is both the ethereal beauty and the transient nature of your subject matter. Tell me more about what it is that you’ve captured here.

Lisa Ross: They are grave markers that go back over five hundred years, to when Islam (which led to Sufism) settled in what is now northwestern China. When certain holy or healing people were determined to be saints in their lifetimes, shrines were created, and all continue to be used frequently for healing–health, spirit, fertility, relationships–basically to maintain balance within a community.

SW: How did you react when you first discovered them?

LR: I was in shock, really. In absolute awe. I really didn’t know where I was or how I had gotten there, quite literally. A guide who spoke no English sort of pointed toward a path which I followed, and then I started to see the colors–strips of fabric, animal skulls, crib-like structures of wood. It was too brief an encounter to know and understand what I was looking at. And, as much as I was in the present, I thought I have to get back here.

SW: This is a very remote area that few westerners have access to. Yet over the course of a decade you were allowed to delve deeper into the dunes and their offerings. What prompted this?

LR:  I had been photographing the Sahara and Sinai, and was offered to visit friends in China. I heard about the landscape and read about the history of the region, but I didn’t know about the shrines until I was there.  Doors just kept opening, and the more I learned, the more there was to do and see. Going to a place once wasn’t enough, and I’d return several times to really understand and absorb it. Also, I got clearer about the kind of images I wanted to make.

SW: Was there a feeling that this would be your destiny for the next decade, to intimately document these shrines?

LR: I kept following my intuition, at times painfully and uncomfortably, but there was this very quiet but strong voice that I had inside. When I ended up in the middle of what I did not know (yet) was a holy site, I knew it was worth it, that I was supposed to be here. The whole endeavor was a spiritual and creative pilgrimage for myself.

SW: How do you feel about the fact that you have archived what once was threatened only by the elements of nature, and now by increased development and modernization?

LR: This area is the largest province of China, officially since the 1949 Cultural Revolution. Always difficult to access, but now it is valued for its wealth in natural resources and minerals, and is being groomed for international business. I’d go back and see the changes–places would be torn down, or part of a tourist site. It wasn’t my intention to archive necessarily, but maybe that was the “meaning” behind the intuition.

SW: What themes were you exploring earlier in your photography that eventually led to this?

LR: What intrigued me when I took up photography was the idea of intimacy, yet going into another person’s world as an outsider did not interest me. What moved me were photographs taken by people in and of their own community. In 1989 I set up a program at the Harvey Milk High School, for kids to define who they were, rather than to be defined by outsiders, because, at that time, there was total misconception about them. During this teaching project, I became less interested in photographing people and more interested in capturing the marks they make. {I feel like this is the whole point of the graph and it really explains her work but we need to hear just a little about how she got there] That was something I could identify with. Yet I wasn’t sure what kinds of images I would create with all this information I had processed.

SW: Your photos are void of people, yet incredibly intimate. Tell me more about how your creative philosophy evolved to the point of these shrines actually being portraits.

LR: I was aware that I was wandering into the desert as an outsider, about to do everything I didn’t believe in. Could I make any intimate images? The burial markers almost take on living form. I photograph them as if they are portraits: evoking those that tend to them and those who have passed away. They require so much maintenance and upkeep, or they will disappear. There is a relationship that is constant. I hope to have captured both their fragility and strength.

SW: You have. And what is next for you?

LR: I’ve been working in Azerbaijan, north of Iran, photographing burial sites, but completely different in that the markers are portraits that are etched into stone.