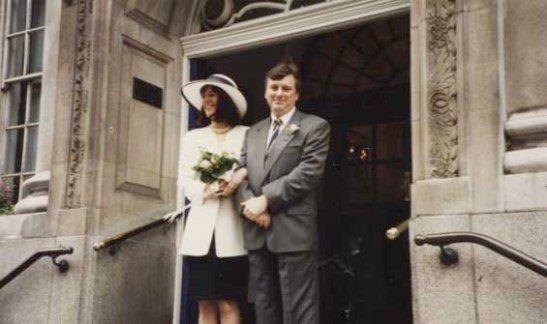 The four of us gathered at the river’s edge, and, each with a scoop of fine ash the color of an oyster shell, released Darla into the water. Her last wish was to have her bodily remains follow those of Steve—to drift, sift, and settle into the vessel of the Thames—and close a twenty-year-old time gap that had separated them.

Her British husband had been the perfect mate for my childhood friend, a spark first lit in the looming presence of Durham Castle when England was still swinging (at least to us smitten American girls, although the Beatles had disbanded two years previous). Darla and Steve bobbed and weaved in friendship segueing into a courtship that steamed ahead, then sputtered just a bit, before cresting into the New Wave of the 80s. Sweet dreams are made of this.

Not in a hurry to marry, they lived together in towns just outside London, first with his mum (a bit of chafing there), and then, several years after settling into their first real nest, they tied the knot under Darla’s wide-brimmed picture hat (worthy of Ascot). I had visited and stayed with them in both places, observing their cozy habits, mingling with their cats, and basking in their hospitality.

Darla was working for Boston University’s London office, helping foreign students acclimate to college life. She was by now a true cosmopolitan, but acquiesced to Steve’s desire for a brick row house, once a workman’s home, in the charming town of Marlow. In the back was a rabbit hutch and a narrow yard, perfect for a simple English garden, leading to an alleyway. Life was good. By now in their early forties, they were as much in love as they had been in the bell-bottomed jeans years at Durham University.

While visiting the states over the Christmas holidays, Steve complained of a headache. On the early morning of New Year’s Eve day, a blood vessel in his brain burst, ending the Camelot life Darla had embraced. I got the phone call and flew from New York to be with her for a short while, offering whatever kind of support I could provide. (I had not yet experienced that kind of loss, but in a few years I would.)

We painted her kitchen and perused cookbooks for my stay, and carefully selected produce from the market to feed the rabbit. At night we drank wine and watched The Best of Johnny Carson from her DVD (or was it VHS?) collection. It all seemed almost normal, but we were “acting as if.” And then I passed the baton to the next visitor to help my friend enter the murky waters of widowhood.

Roger, her younger brother by three years, was the one who broke the news to me about Darla. It was shocking, and yet not. I had only just received an email from her, perky in acknowledging the rapid approach of St. Patrick’s Day, and did I read Pictures At a Revolution yet, a book she knew I would love about the five Oscar contenders in 1968. Three weeks later, a second wave of cancer had overwhelmed her body, and there would not be a third bobbing above the surface.

The four of us—Roger, her and Steve’s two Brit friends Mike and Louise, and I—were now bonding in what could have been an awkward encounter. We had either never met or barely knew each other or were no longer in touch, but with Darla as the cog in the wheel, things rolled smoothly and our plans gelled under the low-beamed ceiling of the town’s oldest pub. Drinks and nibbles downed, we were on our way.

First stop was to see and sit on the memorial bench Roger had installed in the town park, with its plaque dedicated to the couple. (Nice! we agreed. And already in use.) Then we took the short walk down to the river. A few swans nodded their elegant necks under a picturesque iron bridge as we chose the same spot where Steve had joined the current two decades earlier.

That moment of dipping into the bag is like no other. It is sooty and sacred. This was not my friend, and yet it was; the ash a tangible shadow of Darla’s spirit. People walking on the bridge above looked down, curious but not gawking (Brits!), and the rowing club was warming up across the way. Maybe they were wondering what we were doing so close to the river’s edge on a chilly, grey day. Then again, maybe this happens from time to time on the Thames.

Mission accomplished, we lingered and observed that the ash was not whisked away immediately. Who knew, maybe some particles really would mingle as sediment with Steve’s at this very spot? Now truly bonded, we walked back into town to a local restaurant that managed to be both cozy and high end. Toasting Darla and Steve, and relishing four-star food that my culinarily sophisticated friend would have enjoyed thoroughly, I sensed she was quite pleased with how this all played out. I was pretty sure my companions felt the same. We hugged good-bye and promised to email photos.

There was another day for me, now on my own. Waking up to sunshine and blue skies with sheep-wooly puffy clouds, I retraced my steps from the previous day, saying my private good-byes. Now I was feeling more complete, even a bit jaunty. I explored side streets, discovering the cottage where Mary and Percy Bysshe Shelly lived as she completed her Frankenstein novel, and stuck my nose into every shop—very Darla-esque! My childhood friend would have found a smart handbag, but I ended up with a very practical knapsack. Into it I tucked the latest Bill Bryson book. He had been my travel companion since I inadvertently checked my reading material through, back at JFK. Kicking myself a bit, I had reluctantly wandered into the airport bookstore. The Road to Little Dribbling sat there as if Darla herself were shining a spotlight on it (and maybe she was). She had enthusiastically introduced me to Notes From a Small Island decades ago, feeling a kinship with another expat who had also fallen in love with his adopted country in the early 1970s. A double dose of Anglophilia had rubbed off on me this time. Not just with the passion of youth, but the realization that England was a place I could always return to with bittersweet comfort. There was a bench waiting.

I ended my short stay feeling that we had indeed fulfilled Darla’s (and maybe Steve’s) final wishes. And that little glow was just enough to continue to “keep calm and carry on.” 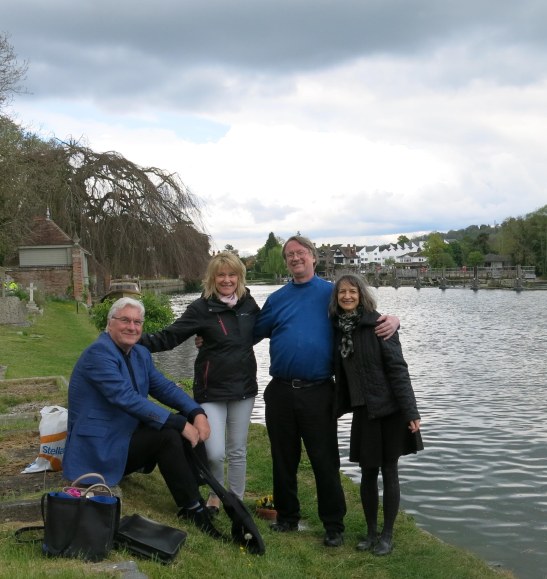