What I Learned at Church Camp

In 1964 I spent the most extended stretch of time away from home in all of my eleven years on the planet. I was in pre-teen geeky prime. And a Beatles fan.

Somehow I was convinced (or even possibly wanted) to attend a church camp. I am guessing that it was for two weeks. The letters and postcard that I wrote (saved by my mother all these years) were postmarked within the first several days of August, probably when I was at my most homesick. 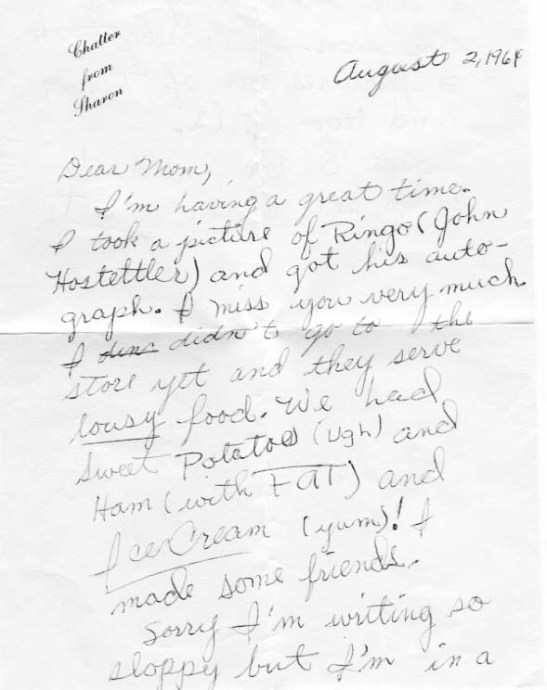 Camp Michaux was nestled in the Pine Furnace area of Pennsylvania, under an hour’s drive from my suburban ranch house but seemed light years away. This was as deep in the woods as I’d ever been. Packing my madras shorts, bathing suit, brand-new pocket knife, and Keds, I was ready for some outdoor adventure.

The church-y part had no special appeal, and even if it did, I was immediately faced with a worldly temptation—the cute lifeguard. My Beatle-festooned bedroom had been traded in for spartan bunk bed barracks, while the fresh pine-scented mountain air did something to my inherent shyness. It evaporated.

I worked up the nerve to approach him. “You look like Ringo!” The proof lies deep in a leatherette photo album: a piece of pink paper sandwiched between snapshots. John Hostetter, he wrote in pencil, and I made sure it would never fade by tracing over with a Bic pen.

John (“Ringo”) Hostetter gallantly accepted whatever pestering I administered, most likely just hanging around and giggling with my new female cohorts. At the very end, before heading back to my suburban pink bedroom, I presented my church camp crush with a gift—my craft project—a lanyard with a pendant that was a crosscut slice of a tree limb, with his name (John? Ringo?) burnt into the wood’s flesh, then varnished for posterity. Once it was dry, I laced it onto the strip of rawhide and dangled it at arm’s length with pride.

My gift was received graciously, without any laughter or patronizing or condescension. Looking back, I realize how this episode in my life could have ended badly in all different directions. Instead, the pink piece of paper is a reminder to me of a tender time, where nothing emotionally damaging happened between an older teenage boy and an impressionable preteen girl. And that might make it all the more noteworthy, on a day when, just a few hours ago, an accused sexual abuser (he was 18, she was 15) has been voted onto the United States Supreme Court.

Recently I decided to do a bit of internet detective work on John Hostetter. Incredibly, I found him. He became an actor, and sadly, died only two years ago. I scrutinized the Google images; the Beatle haircut had been replaced with a bald pate. But, this was unmistakably my lifeguard. He had a recurring role on the 1990s sitcom Murphy Brown, as John, the stage manager. And he popped up a few weeks ago when I was watching an early episode of NYPD Blue.

I was happy to see he had become an artist, retired in Florida, and was married to the same woman for forty years. He seems to have led a well-rounded life, and was a genuinely nice guy. Then again, I knew that way back when.

Camp Michaux, I found out, had a darker history before leasing itself out to the United Church of Christ to teach young girls how to swath a path in the woods with a pocketknife. During WWII it was a POW camp and interrogation site for German and Japanese soldiers and commanding officers.

5 comments on “What I Learned at Church Camp”