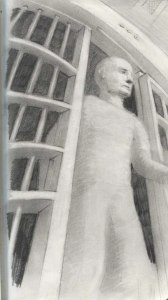 D. approaches me with the air of someone who has acclimated to the harsh boundaries that have redefined his life these nearly two decades behind razor wire and bars. A quiet, even tension fuels his gait, which seems wound to spring inward, not outward. Maybe by now he has learned to avoid potential conflict, has acquired survivors’ instincts in a place where rules are arbitrary every day and karma struggles to carry any weight. Or maybe karma is in full bloom.

But, really—what do I know? Only that here I am, after somewhat reluctantly joining a volunteer mentorship program with the mission of encouraging inmates to keep journals. My misgivings came not from any fear or disdain of interacting with a man incarcerated for violent crimes, but, rather, my general self-perception that I was not qualified to do this.

Wait. Let’s back up and fact-check that last statement. Of course I had some fears about striking up an ongoing interaction with a man convicted of murder. After agreeing to participate in Transforming Lives NY, I decided that I needed to know. I Googled D., and the gruesome details from twenty years ago leapt from the computer screen directly into my nervous system. Future “What if” scenarios seeped into my darkest imaginings. Was he going to toy with me like Hannibal Lecter did with Clarice Starling? I spoke to the director of the program and my doubt triggered hers—now she wasn’t sure about me, either. After some time to consider with a calmer state of mind, I decided I was going to do this. What “this” would be was still a question mark. But if there is one skill in life I am trying master, it’s being comfortable with the unknown.

D. now stands opposite me, and we lock eyes and then shake hands. He is not wearing the traditional prison uniform, but a forest green polo shirt and khaki pants, no belt. I can’t help but notice that his skin is clear, pale, and uncreased. There is a lack of guile to his direct gaze that acts as a pilot light for our nascent conversation. I seize it with an appetite I didn’t even know I had.

Encouraging him has not been difficult. Sporadic snail mail had begun with orbiting around his journals: small notebooks where D. revealed himself to be a keenly intelligent reporter of his surroundings, punctuated by dry humor and self-deprecation. Some traits I had not expected: a polite civility and humility. And what appears to be genuine gratitude. He is also a visual artist of considerable range and talent, making me feel we were a good match. These discoveries evolved into a mesh of gears as we shared our creative outlets and processes over the course of a year.

We now sit facing each other across the narrow table, and I wonder if we will be able to graft this new skin of mutual perception from an actual meeting in the flesh. Armed with the twenty dollar bill pay-it-forwarded to me by a veteran visitor, I finally ask what seems an easy question.

“Do you want something to eat or drink?”
D. insists he is fine. I choose to believe this, that he truly wants or needs nothing—everything that I read in his self-contained body language. Only the air between us waits to be filled. An absurd relief bolts through me in contrast to his Zen calm; I won’t have to wrestle with vending machines.

My next question: “Is there anything I am keeping you from doing?” After all, he did not know I was going to appear today. D.’s journals have been filled with pithy depictions of the tedium, but there are bright shafts of sunshine as well. For instance: his witty in-house newsletter for their softball league—the one that he sent me of all of last year. There was even a cliffhanger that had me, generally a non-sports fan, rooting for his team to win the prison pennant. Was I interrupting an important game? Or any game? No, he told me. Game privileges have been taken away this summer. Someone somewhere in the system did something. The warden’s decision to punish everyone seems both casual and calculated, mirroring every prison film I’ve ever seen.

But, back to the original question. A slight smile crosses his face. “No. There is nothing I need or want to be doing. Other than sitting here.”

And so, as we peck around our common ground, nuggets of gold begin to surface. He asks how I approach my art. I don’t often get a chance to articulate what comes naturally to me, and find myself stumbling to make sense, even to myself. I already know where D. and I overlap: we are both perfectionists who tend to be hardest on ourselves. I see proof in scribbles where he has corrected a thought in his journals, and in apologies for perceived shortcomings in his art. I see it in the draftsmanship he applies to difficult scenarios: views from his cell window of the building he has not stepped outside of, other than the yard, in nearly two decades. His sharp perception and soft pencil capture perfectly the dull repetition of life in prison: windows, bricks, razor wire loops . . . days, months, years.

Perfectionistic tendencies can be explained with a better word: conscientiousness. A word that implies sincere effort and care, usually padded with self-doubt. I became fully aware of this when D. sent me his contribution to Voices, the appropriately titled magazine, put out by Transforming Lives NY, of inmates’ writing and art. D. had taken a short journal entry that involved a baby bird and a dilemma, because he is “so damn observant,” as he put it. He edited it, typed it, and laid it into one of his exquisitely rendered watercolors of the prison roofline. It is evident: He cares. And what artist or writer doesn’t thrill to seeing their work in print? It is validation of self-worth that too often seems in short supply.

I try to encourage D., telling him that with his range of style and mood, his innate intelligence and focus, he can go in so many different directions. All within the space of his cell.

On my third asking, he acquiesces to my buying him a Coke. Two and a half hours fly by, and at 2:29, the final warning comes that visiting hours are over. We hastily say good-bye with no neat tying up of this visit. This gift. I don’t know what he has taken away from our meeting. I only can say that I am somehow a better person for having gone to jail.

Transforming Lives For A Safer New York  is a program that advocates for rehabilitative opportunities for inmates in prisons, and calls for the elimination of punitive measures counterproductive to that of rehabilitation. If you are interested in learning more, donating, or becoming a mentor, please contact them at: http://www.TransformingLivesNY.org

images copyright and courtesy of D.

This entry was posted on December 8, 2018 by DIRNDL SKIRT in Essay and tagged arts in prison, maximum security, prison mentorship, visiting prison.